Fanfic: I'll be home for Christmas 2/2 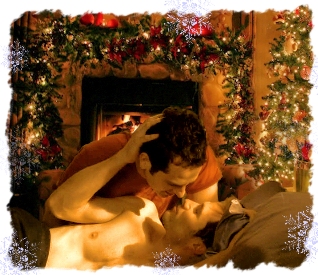 I'll be home for Christmas 2/2

By Marea67
About: Kevin/Scotty
Rate: NC-17 Don't you just hate it when that happens. ;)
Disclaimer: Written with love, not for money
Summary: Set in season 2, Kevin/Scotty's new relationship is still ... very new ...
Author's note: I couldn't think of a title, so Iris suggested that I'd google Sky Radio and take the first Christmas song I'd hear... Which was Michael Bublé (one of my favs!) with "I'll be home for Christmas". I've already used that title before, but .. a deal is a deal. ;)
And, before I forget, with thanks to Sue for suggesting on Twitter: "... Christmas, log fire, it's snowing outside, warm and cosy inside any help?"... It helped! ;)

“Oh, Kevin! This is… this is beautiful!” Scott’s face lights up when he sees the small cottage, surrounded by tall trees. It looks like it just jumped off a Christmas-card. It is covered in snow, but still looks warm and inviting. Well, from the outside anyway, Kevin figures with his usual cynicism.

“I hope you will like it. It was such a spur of the moment thing.” Kevin nervously tells Scotty and Scotty can see how Kevin bites the inside of his cheek. He can imagine the thoughts on Kevin’s mind. What if the place sucks? What if it’s not warm enough? What if Scotty won’t like it? What if…?

“Can we go in?” Scotty asks and, excited like a little kid, he cuts off Kevin’s negative thoughts.
“Sure.” Kevin answers and he opens the door, prepared for anything. From the place being invaded by angry skunks to half the structure having collapsed under the weight of the snow.

But he’s pleasantly surprised to find the roof in one piece, the walls thick and covered with solid wooden panels and there are no rampant animals. Just a big fire-place with a huge rug in front of it, that invites to lie down on it and enjoy the heat of the fire. The leather couch looks used and comfortable.

There’s a Christmas-tree, all set up, in the corner of the room. There are candles everywhere. The place is definitely prepared to be a romantic getaway. And though the lawyer in him wonders about the fire-hazard, the lover in him can see the potential. There’s a small kitchen, which is good, because it means that Scotty won’t be spending too much time there.

Much to his surprise, there’s no television, but he doesn’t believe he will miss it. Meanwhile Scotty has found a radio and upon turning it on, they are greeted with Christmas-songs.
“Kevin, this place is just perfect..” Scotty sighs, his eyes are bright with joy.

“Really? You really like it?” Kevin asks, still wondering what could be wrong with the place. Surely he can’t be this lucky?
“I love it… but it’s a little cold.” Scotty says, rubbing his hands together.
“I’ll make a fire.” Kevin says.

“You know how to do that?” Scotty asks surprised.
“We have a fire-place at mom’s house.” Kevin answers, slightly offended that Scotty would think him incapable to make a fire. Scotty smiles sweetly.
“I’m sorry. I didn’t mean it to sound as if I doubted you….”

He wraps his arms around Kevin and Kevin forgets everything when Scotty’s warm tongue invades his mouth. He knows that eventually he’ll have to breathe, but for now it feels as if too much importance is given to breathing and he’d rather be lost in his kiss anyway.

When Scotty finally breaks the kiss, they are both out of breath and rather aroused.
“Am I forgiven?” Scotty asks.
“I would not even remember what I was supposed to forgive you for.” Kevin replies with a dreamy look on his face.

“That means that I did it right then.” Scotty grins. “Why don’t I start by unpacking the food and you can make the fire and we can create a warm and nice place in here…” Adding action to his words he turns over to the grocery-bags and soon enough they’re gone from the table.

Meanwhile Kevin has managed to create a fire that warms up the living room and kitchen . He opens the wine, while Scotty makes an effort to create a meal. It isn’t until Kevin starts helping him that Scotty realizes how uninspired he has become, because Kevin has better ideas than he has.

Kevin tries to read a bit more, but his eyes are slowly closing and it’s getting harder to open them again. Scotty is lying against him. His body heavy due to the deep sleep he’s in. They had had their dinner in front of the fire. The wine had made them more relaxed and the warmth made them sleepy.

The warm shower had left them feel clean, but incredibly lazy. The comfortable bathrobes smell fresh and they makes their bodies easily accessible for each other and so it had started. First with playful kisses, then gentle caresses were added and their moans had become louder as their touches had become more intimate.

Their love-making hadn’t been passionate or wild, more a case of gentle and caring almost lazily rediscovering the other one’s body. Quick satisfaction hadn’t been the thing they had wanted, but because it had been a while since they were together so intimately it was just a short moment before satisfaction took over.

After all the fresh air, cold outside, warm inside, the delicious meal and the good wine, Scotty had barely been able to keep his eyes open any longer and, though it was funny to see him fight his sleep, there was also something so peaceful to finally see him fall asleep, pressed up against Kevin.

Kevin hates that he has to wake him up, but they can’t both sleep here on the floor.
“Hey, baby, wake up.” He says softly, kissing Scotty’s nose. Still half-asleep, Scotty’s lips part and he patiently waits for another kiss. Kevin smiles lovingly and complies by letting his lips play with Scotty’s, not fully going into the kiss, not breaking the touch either.

Scotty moans, wraps his arms around Kevin’s neck and he pulls him closer for the kiss.
“Scotty, wake up, we have to go to bed.”
“We could do it here.” Scotty replies, still not completely awake. Kevin’s smiles again, wishing he wasn’t so tired, because he has a good idea what ‘it’ is and he wouldn’t mind ‘it’.

“I would that love to, but I think we’d sleep better on the bed.” He insists.
“Sleep? Oh, right, sleep.” Scotty yawns. He watches how Kevin gets on his hands and knees, searching for the energy to stand up. Scotty bites his lower lip, because watching Kevin in such a suggestive position awakes something inside him.

He lets his hand slide along Kevin’s spine and he can feel Kevin jerk away from the touch at first, but then arch his back to follow Scotty’s touch. Scotty can feel his entire body react now that Kevin so clearly displays what he wants. He can hear Kevin hold his breath.

Scotty’s hands firmly grab Kevin by the waist and he pushes Kevin against him, letting his hard cock slide against Kevin’s ass.
“Scotty…” Kevin wants to let Scotty know he’s too tired, but there something about the way that Scotty lets his hand disappear between Kevin’s legs that makes Kevin forget all his tiredness.

Scotty forces Kevin on his knees, shoving Kevin upper-body against his own. He nibbles on Kevin’s earlobe, knowing it will send a message straight to Kevin’s groin. Kevin utters a not very coherent ‘huhhh!’, but he isn’t allowed to think anything through beyond this point.

“Do you want me to fuck you…?” Scotty whispers in his ear. “Hard….? Fast…? Oh, sooo deeeeep ….” He rightfully takes the squeak, with which Kevin answers, as a ‘yes’ and he reaches out for the condoms. With trembling fingers he prepares Kevin. It’s a job he doesn't do too well, but he’s not too concerned.

Scotty wants this to play out a little bit longer, so he slows down. He can feel by the jerky responses from Kevin, that Kevin wants him to go faster, but Scotty enjoys the moment too much to give Kevin some quick satisfaction. On his hands and knees, Kevin completely surrenders.

He begs Scotty for more. He needs Scotty to make him come .
“Please, … please…” He begs, so close to the edge, but not allowed to go over. Scotty pulls away, making Kevin moan in disappointment.
“Come here.” Scotty pulls Kevin up and guides him to the bed.

Kevin lies down on his back. The bed isn’t high enough for Scotty to take Kevin the way he wants, so he shoves a few of the pillows underneath Kevin, to make sure that Kevin is a little higher. Without much of a warning he lets his hard cock slips inside Kevin again. Kevin immediately reacts.

With his ass on the edge of the bed he surrenders to each of Scotty increasingly harder thrusts. He afraid to slip away from the edge, but Scotty’s strong hands hold him place. Kevin encourages Scotty, he begs for more. He’s losing himself, reacting solely on instinct, his need for satisfaction becoming the most important thing in the universe. He cries out Scotty’s name.

In response Scotty’s hand curls around Kevin’s cock and Kevin loses it. His orgasm is so strong that it nearly takes away his ability to breathe. Scotty looks down on Kevin, for just a moments realizing how beautiful he is when he lets himself go like this. Then the pressure becomes too big for Scotty to handle as well.

“Sleep, huh?” Scotty teases lightly.
“Can’t help it that you had a change of heart.” Kevin yawns.
“Was it good enough for you?” Scotty wants to know. Kevin doesn’t answer, but his soft moan tells Scotty what he wants to hear.

Kevin keeps his eyes closed. In his mind he can still feel Scotty inside him, hard and strong. The memory is too good to let go of, but then Scotty spoons up against him and he wraps his arm around Kevin.
“You were amazing.” Scotty tells Kevin and Kevin smiles.

This is the first day of their holidays. Still a few days to come. And he had been so worried that his Christmas would be ruined by his family. Well, he had nothing to do with them now. He hadn’t even missed them. He hadn’t missed home. Why should he? He had all the ‘home’ he needed right here in his bed.