Rating: NC-17, just to be sure.
Word Count: 1870
Disclaimer: They are not mine. If they were I wouldn’t writing about them, I’d be watching them.
Warnings: None

Summary: Kevin’s ex’s meet each other.

Episode 1.13 - Something Ida this way comes. And I knew it had to be written when this picture got created by my hands. ;-D 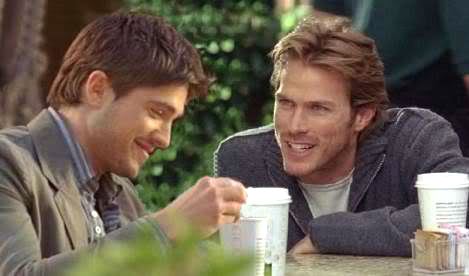 Kevin: “It is insane. It’s kinda like this huge family meltdown, only really fun… Oh, Senator McCallister was there.”

Chad: “His brother is gay, you know.”

Chad: “He cruised me once at the gym.”

Kevin: “It must be almost impossible for you to work out.”

Jason thought he should have one more drink and then he would be drunk enough to get a cab, go home, fall on the bed, roll over and play dead. No, correct that. He would have to go to the Walker house, where his brother and sister-in-law were staying, because basically he no longer has a house in LA and this means having to sleep in the room that used to belong to… Kevin Walker.

And, oh joy, tomorrow night there would be a Walker-clan meeting and, whoopee even more joy, Robert talked him into going there. Which meant that, double hurrah, he would be sitting at the same table as Kevin and his new little pet, what’s-his-name-again?.... Scotty… Right… Which parents in their right minds give their son a name like that? SSSScotty. Jason should find it amusing, but he doesn’t, because it means having to see Kevin happy with someone else, while he is alone and feeling miserable.

Oh, Jason has been looking, but being on campaign to support his brother is not exactly the solid foundation to start a relationship and the occasional sex with some stranger picked up at a bar has lost it’s shine as well. Maybe he should indeed order one more drink. He empties his glass, but before he’s finished, one of the waiters puts a drink before him and gently says:

“One drink, sir, from the man sitting at the end of the bar.” Jason looked up to see who would be giving him a drink. His smile shows his surprise as the man gets up and walks over to the small table where Jason has been sitting.

“Can I?” he asks, pointing at the chair across from Jason. Jason merely nods. Good God, the guy looks even better now that he’s close. His blue eyes check Jason with an almost professional look. Then, in the dark pleasant voice that Jason remember from television he says:

“You are the senator’s younger brother, no?” Jason nods again, clears his throat and replies:

“Jason McCallister. Nice to meet you.” Boy, that sounds lame. But the smile he gets is beautiful.

Jason wished he didn’t sound so breathless, so in awe, but he is impressed with how gorgeous the man looks. How blue his eyes are. Blue like a deep blue sea and Jason just wants to drown in them.

“Haven’t seen you at the gym for a long time.”

“No… I was in Malaysia… Tioman to be exact…f-f-for the church. I’m…. I’m a minister.” There, get that out of the way. Give the man a chance to run and hide.

But Chad doesn’t even blink, instead he shows this charming smile again, his interest apparent when he asks for Jason’s experiences there and slowly, now that he knows what he is talking about, Jason relaxes. He becomes more enthusiastic as he describes how the school got built. The noise of the music becomes louder. So Chad moves a little closer to better understand Jason.

His focus is on Jason, he barely takes his eyes off Jason’s face, while he’s playing with his almost empty glass. Then his hand accidentally brushes Jason’s. For a moment Jason’s voice falters, he bites his lower lip as he gazes right into Chad’s eyes. He swallows hard and Chad’s smile becomes mischievous. Jason replies with a smile of his own and continues his story as if nothing happened, his hand casually sliding over Chad’s, slowly entangling his fingers with Chad’s.

Chad asks questions and Jason replies as detailed as he can. But he runs out of things to say about Tioman. So he asks Jason about his career since coming out of the closet. Jason tells him that after the initial shock had died, his character on his soap-series went under-cover in the gay scene and was now even in love with one another man, much to his own surprise. They laugh and talk some more, but the noise around them becomes too much.

“How about we leave this place for something more quiet?” Chad suggests. Jason nods and they leave.

Once in Chad’s car Jason really relaxes. The night is warm. The humming motor makes him sleepy. The alcohol in his system turns everything a bit hazy. The chairs are comfortable and Jason enjoys sitting there with the wind in his hair. Every now and then he looks at Chad and sometimes Chad catches his looks and smiles in return.

“Chad, I think there’s something you need to know…”

“I want to thank you for shielding Kevin Walker as much as possible. I know you made a deal with the paparazzi that you would give them all the dirty details they wanted, provided that they leave him alone.” A serious look graced Chad’s handsome face.

“It was about me, the actor. They wanted to see him outed. Kevin wasn’t interesting to them… How did you know?”

“This is LA. You always run into someone, who knows someone who has a best friend who’s cousin twice removed told him something….” Jason shrugged.

“Well, actually, I told it to the girlfriend of the stepmother of the cousin twice removed… …Shows you can’t trust anyone.” Chad jokes, but then more seriously. “I hadn’t realized that Kevin is your brother’s brother-in-law. Guess the Walkers talked about me, then?”

“I was… I was involved with Kevin…”

“Basically… yes. How did you know?”

“Kevin doesn’t easily walk out of a relationship. If he’s in love, he’ll fight… Hell, he loved me and we had our fair share of fights, but in the end it was me who broke up with him… Any chance of you’re getting back together?”

“Nope. He’s is love with someone else…. Scotty?” Chad shook his head. The name didn’t ring a bell. And Jason carefully ventured:

“Valentine’s Day? Your then girlfriend introduced them to one another?”

“That guy? … So Michelle was right?... There was something between them that night.”

“There had been something between them a few months earlier, too…” Jason grinned.

“So, they already knew each other? No wonder Kevin went with him. Former boyfriend. And I thought he did it to make me jealous.”

“Sorry that I just bruised your ego.”

“It’s alright. All that matters to me is that Kevin is happy. I am just surprised he told you about me at all.” Chad said. Jason started to laugh.

“You don’t know how the Walker-clan works, do you?”

“Never met any of them, except Kev.”

“Well, Justin said he’d hoped I’d be better to Kev than ‘the Actor-dude’, from Tommy I found out your name. Sarah told me how and why you guys split up. Kitty gave me the details about Valentine’s Day night. And with that info I went to Kevin who shrugged and explained that he didn’t want to talk about it. End of discussion.” Chad couldn’t help it but laugh out loud. The names so familiar, he had heard them so often in Kevin’s rants and stories. How things went from one sibling to the other…

“Jase,…..” Jason heart beat a little faster, it sounded so hot coming from Chad’s lips. “… what do you want me to do. Drive to the Walker house? Or… to my place?” The small pause didn’t go unnoticed. Jason knew what Chad was asking.

“Your place?” Jason suggested. Chad smiled. Jason felt the shift as the car started to drive a little faster and his stomach reacted with anticipation.

A quick look at Chad showed that Chad obviously had some plans and Jason knew he would not put up much of a fight, when Chad’s hand is moving from the gearstick to Jason’s knee.

Jason sinks a little lower in the chair and spreads his legs somewhat. Chad’s fingers slide up his inner thigh. Gently over his zipper, playing with the button…

“Open them. I want to touch you.” Chad orders in a hot voice and Jason can’t wait either. Quickly unzipping and lowering the pants a little. Chad’s quick look at Jason lap and the way he holds his breath for a second, tell Jason he’s impressed enough by what he sees.

Although he’s very excited, when he finally feels Chad’s warm hand around him, he’s still a bit surprised. The strong fingers know exactly how to take care of him. Wrapping around him, not too hard, not too soft, but just rrrrrright!

He moves a bit in the chair so that he sinks even deeper and give Chad some more space to move.

“Wait.” Says Chad. To Jason’s dismay he removes his hand and Chad laughs at the small protesting sound that comes from Jason’s lips.

“I’ll be right back. Don’t worry.” Chad teases as his fingers slide over one of the buttons of his car’s control panel. Jason feels his chair recline. Chad stops when he thinks that Jason is where he wants him to be, his hand immediately back on Jason’s hard cock. Jason arches into the touch. It’s even better than before. He moans in appreciation.

It’s not busy on the road Chad has taken. He is driving slower than before, but Jason doesn’t notice. He wraps his hands around Chad’s hand. Guiding those fingers that set his whole body on fire. Biting his lower lip, thrusting up, he tries to find satisfaction.
“Come, baby, come for me. You can do this.” Chad says in a low voice, licking his lips as he quickly glances at Jason. “You’re so beautiful… I can’t wait till we get home…. I am going to fuck you… slowly… and very… very…long….”

Jason’s mind creates an image of lying under Chad with Chad buried deep within him, encouraging him with that deep voice, close to his ear, hands sliding over his body, lips on the back of his neck, leaving perhaps a mark of ownership….. It’s too much for Jason to handle, he loses control and comes with a small cry. Jason knows one thing. This was the first time that Chad had made him come this evening, but not the last.